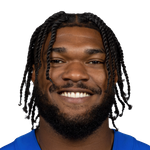 The Rams were going to draft a running back - we knew that after they interviewed a ton of them in the draft process. What we didn't know was that they'd take one with their first pick in the draft. While Darrell Henderson is a threat to Akers' overall workload, they clearly know what they have in Henderson, and drafted Akers early. It seems like Henderson is going to be the lesser part of the timeshare, while Akers is the early-down back and likely to receive goal-line work. There's a chance Henderson has a bigger role than anticipated, which prevents us from trusting Akers as anything more than a high-end RB3.