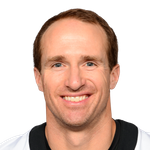 I'm not sure if anyone has realized it, but Brees has broken the age 40 barrier and is now 41 years old. Unlike Tom Brady, Brees is going to retire after this year. His average depth of target continues to decrease, which will require more pass attempts in order to reach QB1 territory. How to prove that? He completed 74 percent of his passes and threw a touchdown on 7.1 percent of his attempts, yet he was just the No. 7 quarterback in fantasy points per game. His ceiling at this point in middling QB1 territory.