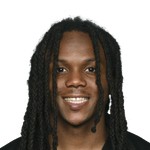 The Steelers have already said that if James Conner is healthy, they want him to be that "lead back" that Mike Tomlin has always leaned on. They also said they believe Benny Snell can be that guy if something were to happen to Conner. That doesn't mean McFarland will be chopped liver, but it does mean he's not going to be a 10-plus touch running back without injury. I've compared McFarland to Chris Thompson, which would make sense based on the Steelers' comments on the power running backs. If he gets 6-10 touches per week, he has enough explosion on a per-play basis to make an impact at times, but nothing you want to rely on consistently.