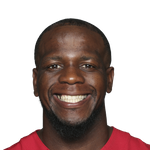 It's crazy to think the Patriots gave up a second-round pick for Sanu last year, especially when you know he'll turn 31 later this year. He's going to start for them, and it's possible his value went up with Cam Newton's signing, though it's important to remember Newton has thrown more than 24 touchdowns in his career just once. Still, Sanu tried playing through injuries with the Patriots last year and it affected his production. He may have some bye week streaming appeal if Newton can get his career back on track.