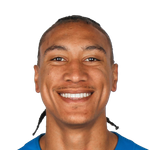 Did the draft pick of Van Jefferson affect Josh Reynolds' role as the No. 3 receiver in the offense? Jefferson fits more of the Brandin Cooks mold than Reynolds, which is where there's some hesitance to draft Reynolds in 2020. However, we do have a history that shows when he is in the starting lineup, he produces. In the 14 games he's seen four-plus targets, he's totaled 46 receptions for 613 yards and seven touchdowns. There's a chance he's being underdrafted, but there's also a chance that he remains the No. 4 receiver on the team.