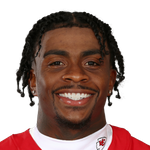 It's been a while since we've seen McKinnon on a football field. He's been with the 49ers for two years but hasn't played a down of regular season football. Now that they've traded away Matt Breida, there's a role to be had, but we don't know if he's capable at this stage of his career. There's been some whispers that he may not make the team, though that may be a surprise considering they've held onto him this long. Between Raheem Mostert, Tevin Coleman, and McKinnon, it's going to be tough to find consistent volume and production in this backfield.