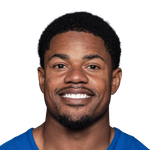 In a season where he was dealing with injuries and a rookie quarterback, Shepard still posted WR2 or better numbers in 40 percent of his games, which ranked 33rd among wide receivers. Now, to be fair, the offense has changed, but it doesn't appear the new regime is very fond of Evan Engram, as evidenced by putting him on the trade block during the NFL Draft. Golden Tate is aging, and while Darius Slayton did flash at times, it was a relatively small sample size. It shouldn't shock anyone to see Shepard get 100-plus targets in 2020 and finish as a WR3, though you do have to wonder what his upside actually is with so many mouths to feed.