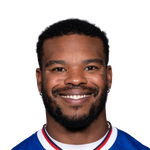 The 2019 usage, or lack thereof, for Harris was puzzling to say the least. When you draft a running back in the third round, you typically use him in some sort of role. Of the 22 running backs who've been drafted in the third round over the last seven years, Harris' four touches were the fewest. He's the clear-cut handcuff to Sony Michel who's been extremely inefficient. If that continues in 2020, we could see the Patriots activate Harris (who doesn't contribute on special teams) and use him as their early-down back.