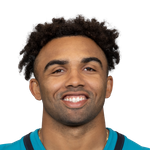 He has the benefit of playing a year with Kyler Murray in Kliff Kingsbury's offense, while DeAndre Hopkins may go through a learning curve. Despite playing just 13 games last year, Kirk saw 107 targets (132 target pace over 16 games). The issue is that Hopkins will get a large chunk of the pie, and Larry Fitzgerald didn't return to play another season to see just 50 targets. It'll be hard for anyone to correctly predict the target share among these receivers, but Kirk is an ascending talent who's entering year three of his young career. Knowing the Cardinals receivers combined for 368 targets last year, it's hard to see a scenario where Kirk sees more targets than he did last year, especially when you know they run a lot of 4WR sets (which cuts into the overall target pie). Kirk has also scored just three touchdowns in each of his first two seasons, so touchdowns aren't likely to make up for a lower target share. He's likely going to be somewhat of a hit-or-miss WR3/4 in 2020 with inconsistent targets.