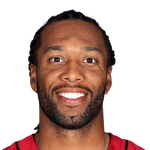 Now entering his age-37 season, we kind of know what to expect from Fitzgerald. He did see a team-high 109 targets last year, and it's difficult to say his role changed much. He's going to be the safety valve over the middle of the field while DeAndre Hopkins and Christian Kirk work the perimeter. There were just six games that Fitzgerald broke the 50-yard barrier last year, so knowing he scored just four times, you understand the lack of upside despite his decent target share. Still, with Hopkins in the mix, that target share will certainly go down. Kyler Murray threw just 20 touchdown passes last year, so it was tough to expect more than the four that Fitzgerald scored. Even with a bump for Murray, it's tough to say the increased touchdown potential will make up for Fitzgerald's decreased target share. He's just a low-upside bye-week filler at this stage of his career. Even with an injury to someone like Hopkins or Kirk, we've already seen that scenario in 2019, and it wasn't more than a WR4-type.