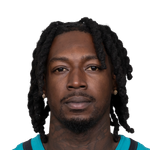 Prior to getting hurt and having his season cut short, Ridley was on pace for 1,066 yards and eight touchdowns in 2019, which would have had him as the WR14. Now going into his third NFL season, there's a real chance for a breakout. Sure, Julio Jones isn't going away but he doesn't have to. Not many realize that Mohamed Sanu saw 94 targets in 2018 and was on pace for 96 targets before being traded in 2019. We don't really expect Russell Gage to fill that role, do we? If you want to know if there's room for both Ridley and Jones to be WR1s, look no further than the Bucs last year with Mike Evans and Chris Godwin, even if it is rare for that to happen. Ridley saw 49 targets in the six games he played without Sanu, which would amount to 131 over an entire 16-game season. Ridley has real top-five breakout potential and is an ideal high-end WR2 on your fantasy team.