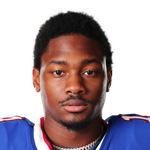 Going from Kirk Cousins to Josh Allen isn't going to be a highlight of Diggs' career, as Cousins has continually been one of the better deep-ball passers, while Allen was among the worst in 2019. Diggs actually led the league in yardage on passes that traveled over 20 yards in the air last year. The Bills are still a run-first team that has a top-tier defense, so it's hard to expect a big jump in pass attempts. They targeted their wide receivers 310 times last year, which was a lot for a team that threw the ball just 513 times. The 60.4 percent target share was the fourth-highest mark in the league. So, again, it's tough to say there will be more to go around. Knowing that John Brown was fantastic last year (115 targets), as was Cole Beasley (104 targets), it's tough to take targets away from them, but we have to start taking them from someone because you don't trade for someone like Diggs and not target him. Still, giving him even 115 targets might be too generous, as it'd completely crush the value of Brown, who already has experience with the quarterback/offense. Realistically, I have Diggs down for 111 targets in my projections. When tied to Allen's inconsistencies, that is a WR3 in fantasy who can get into WR2 territory at year's end, similarly to the way Brown did last year. Diggs is probably a top-eight wide receiver in the league, but you need to targets to move up the boards in fantasy football. I'd be happy landing him as my WR3, but that's about it.