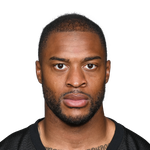 We saw a 150-plus target season for Robinson in 2019, which was a rarity among wide receivers. Based on where his targets took place, he had the fourth-most expected fantasy points among wide receivers last year. There's little reason to expect that to change, as the Bears lost Taylor Gabriel and replaced him with an older, slower version in Ted Ginn. There were just two games last season where Robinson finished with fewer than seven targets, making him an easy every-week start. In fact, he posted WR2 or better numbers in 62.5 percent of his games, which ranked fifth behind only Michael Thomas, DeAndre Hopkins, Julio Jones, and Davante Adams. The fact that the Bears snagged Nick Foles only helps the Bears receivers, as they have twice the chance at competent quarterback play. Robinson should be considered a high-floor, low-end WR1, as it's unlikely he comes with the ceiling of those with better quarterback play.