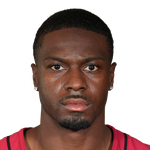 I get it, he hasn't been healthy the last two years. However, when he's been on the field, Green has been a legitimate superstar. Since 2000, here's the list of wide receivers who've posted WR2 or better type numbers at a higher percentage than Green: Michael Thomas, Julio Jones, Antonio Brown, and Odell Beckham. That's the end of the list. He's played his entire career with Andy Dalton. Now moving to Joe Burrow, the quality of the targets should improve. You could argue that Green didn't have a chance to work with Burrow this offseason, but that's the case with all of Burrow's new group of pass catchers. There is legitimate top-10 upside with Green, which is extremely hard to find where he's being drafted. There's risk, but with where he's being drafted, it's worth it.