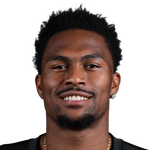 The return of A.J. Green pushed Tate down the depth chart. The second-round draft pick of Tee Higgins buried him. Despite playing just 12 games, Tate ranked 51st in targets among wide receivers last year with 80 of them. Despite being 6-foot-5 and 228 pounds, he scored on just one of them. Clearly, the Bengals did not think of him as Green's successor. It's possible that he's the handcuff to Green because he knows the offense and played that role last year, but it'd only be a matter of time before the rookie Higgins took over.