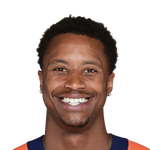 What a year for Sutton in 2019, eh? He didn't finish as high as some thought (WR19), but it was a miracle he finished there if you were to go back and watch some of the passes he came down with. His 125 targets were the 15th most among wide receivers, though it's hard to see that continuing. He had zero competition for targets last year, which is why he saw over 50 percent of the ones that went to wide receivers. He'll now have to contend with first-round pick Jerry Jeudy, who's the most polished receiver who's come out in the last five years, and second-round pick KJ Hamler in the starting lineup. That's not to mention Melvin Gordon, who's an established pass-catcher out of the backfield. Sutton is clearly a star, but this offense is now littered with talented pass catchers. There were just two games all last year Sutton saw fewer than seven targets, but I think that number goes up this year. He was a middling WR2 last year with those high target totals, yet he's being drafted essentially where he finished last year, and that's despite the improved talent around him. If Sutton wants to finish better than a low-end WR2/high-end WR3, he's going to need double-digit touchdowns, and that's just not something I can predict given the talent around him.