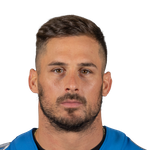 Raise your hand if you knew Amendola had 96 targets last year. Now put your hand down, liar. It was his first year with the team and he clearly had a big role, though he turned those 96 targets into just 678 yards and a touchdown. It does help his projection to know that Geronimo Allison opted out, as he's someone who could've stole slot snaps. Despite being targeted five-plus times in 10-of-15 games last year, Amendola topped 47 yards just four times, and it's not as if touchdowns will help make up for that, as he's scored once every 37.9 targets over the course of his 11-year career. He's a last-ditch bye-week option who'll likely have somewhat of a stable floor in PPR formats, but that's about it.