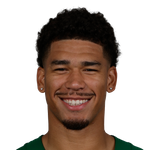 We had to wonder whether it'd be Lazard or Devin Funchess as the starting receiver opposite Davante Adams, but after finding out that Funchess opted out, it should be Lazard's job. Despite only being a part of the offense in 10 games, Lazard racked up 52 targets last year, including 17 of them in the final two games that he turned into 114 yards and a touchdown. That pace of targets over a 16-game season would add up to 83.2, which is certainly enough to be relevant, and there's obviously room for growth with the departure of Geronimo Allison. Aaron Rodgers has continually gone to bat for Lazard, and that's something to latch onto, as Rodgers did the same thing for Davante Adams back when he struggled at the start of his career. Lazard isn't someone you should rely on for WR3 production right out of the gate, but it's certainly within the realm of possibilities knowing that Rodgers trusts him. If you can land him as your WR5/6, there aren't many in that territory who offer the target upside Lazard does without injury in front of them.