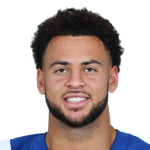 He's someone who rapidly moved up draft boards as the NFL Draft approached. The Colts liked him so much that they selected him over Jonathan Taylor (who they then traded up to get a few picks later), so it's clear they love Pittman. They did love Parris Campbell in last year's draft, too, so we can't go overboard. They said the plan is for Pittman to be the "X" receiver in the offense, which should present value with someone like Philip Rivers, who has zero issue throwing into tight coverage, especially when his receiver is 6-foot-4 and 223 pounds. This is your reminder that Mike Williams is 6-foot-4 and 220 pounds, while Vincent Jackson was 6-foot-5 and 230 pounds. These are wide receivers that Rivers targeted relentlessly. Mike Williams averaged just 2.0 yards of separation at target last year, the second-worst mark in football. Can Pittman make it into the starting lineup opening day? If so, Rivers could fall in love with his size, particularly in the red zone. He's worth a pick with one of your last few selections, as he's a dark horse to lead the team in receiving touchdowns.