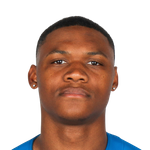 There were flashes of what could be an alpha wide receiver in Chark last year, but there were also times where he disappeared. For example, he had six games of 15-plus fantasy points, but he also had eight games with less than nine fantasy points. Is it reasonable for him to grow as a player? Yes. Is there now a bit more competition for targets on the roster? Yes. With the shortened offseason, it will be difficult to learn a new playbook, especially for rookies like second-round pick Laviska Shenault. Because of that, Gardner Minshew will likely be looking Chark's way a lot. With a schedule that starts with the Colts, Titans, Dolphins, Bengals, Texans, and Lions, Chark should have a monster first half of the fantasy season. There are much tougher matchups as the season goes on, however, but drafting Chark as a low-end WR2 with upside in the fifth round makes sense. But again, you may want to look at the possibility of trading him during his bye in Week 7.