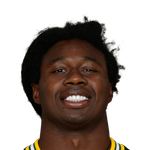 Does anyone else believe that Watkins may have played through injury in 2019? He hadn't tallied anything less than 8.3 yards per target over the previous four years, and that's despite some subpar quarterback talent in Buffalo and Los Angeles. Knowing that Watkins is the No. 2 option at wide receiver in a Patrick Mahomes-led offense and that he's going outside the top-50 wide receivers is bananas. Sure, he was bad in 2019, but he looked like the player we thought he'd be once they got to the playoffs, as he compiled 14 receptions for 288 yards and a touchdown on 18 targets in their three playoff games. The Chiefs also had an opportunity to move on from Watkins this offseason, but they decided to keep him on the roster. He may not be an every-week option from the get-go, but knowing you have a player tied to Patrick Mahomes who saw six-plus targets in 10-of-17 games last year should carry some weight. Snagging him as a WR4/5 with upside makes too much sense, as we can't let one inefficient year erase what he's been throughout his career. There's an avenue to him finishing as a WR3 without injury in front of him.