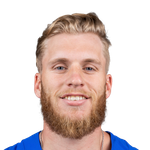 It was a tale of two seasons for Kupp last year, as he was the No. 2 receiver in fantasy football through eight games, tallying 58 receptions for 792 yards and five touchdowns. He then fell off hard, finishing as the No. 31 receiver over the final eight games, totaling just 36 receptions for 369 yards and five touchdowns. The Rams started moving towards more 12 personnel, which includes two tight ends, which in turn leaves just two wide receivers on the field. Knowing Kupp is a slot receiver by nature, it affects him greatly. He actually played just 61 percent of the team's snaps in Weeks 16 and 17. But I'd argue that Jared Goff needs him on the field. While targeting Kupp, Goff posted a 117.0 QB Rating. While targeting everyone else, that number is just 78.6. Sean McVay is consistently evolving as a play caller, which bodes well for Kupp, as he'll likely be expanded to different roles moving forward. There are question marks, that much we know. However, we have still yet to see a "bad" season from Kupp in the NFL. I don't consider him as safe as his teammate Robert Woods, but Kupp should still be considered a low-end WR2 who has more touchdown upside. I mean, he's scored 21 receiving touchdowns in 39 career games. Woods has 25 receiving touchdowns in 100 career games.