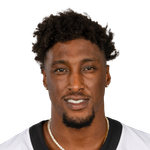 I'm not sure how many realize how rare Thomas' season was in 2019. He saw 185 targets on a team that threw the ball just 581 times. That's a ridiculous 31.8 percent target share. Just so you know, it's rare for a receiver to see a 25 percent target share. I've already stated in the Drew Brees paragraph that I expect this offense to throw just a bit less in 2020. Initial projections have them around 560 pass attempts, so bringing that down to even a 28 percent target share would force Thomas to lose about 28 targets. You can see why a repeat of last year's numbers are unlikely, especially when you factor in the arrival of Emmanuel Sanders as a rock-solid No. 2 receiver who'll garner more targets than Ted Ginn and/or Tre'Quan Smith would've. Still, Thomas is my WR1 heading into the season, because outside of injury, he's projected as my top receiver by a full 15 half-PPR points.