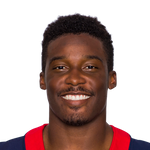 It's kind of crazy how some wide receivers are just glued to elite quarterbacks no matter where they go. Dorsett fits that bill after playing with Andrew Luck, Tom Brady, and now Russell Wilson. With no offseason, it may be difficult for him to get the nod over Moore, but if he did, his skill set would probably fit very well with Wilson. I say that because Wilson completed 48.2 percent of his passes over 20 yards and had a QB Rating of 119.2 on them. While in New England last year, he saw 17 deep balls, though only five were catchable. He caught all of them for 192 yards and three touchdowns. Both are battling for the No. 3 in targets, so it's not like either will be a weekly producer, but Dorsett is the one with the better pedigree, and his skill set aligns with Wilson's strength. If Lockett were to miss time, Dorsett actually played very well in the slot for the Patriots, catching 13-of-14 targets for 218 yards and three touchdowns. He's someone I've snagged quite a few times at the end of best ball drafts.