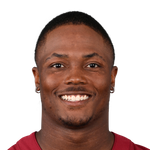 It was remarkable what McLaurin was able to do last year while playing on one of the worst teams in football. The disappointing part was that even though he saw 37.1 percent of his team's air yards (sixth in the NFL), he finished with just 93 targets. Knowing it's unlikely we see a big increase in pass attempts, it's hard for him to see an air yards number that is much higher. The reason we can be semi-optimistic with his targets is due to the lack of options around him. Kelvin Harmon and Paul Richardson are gone, along with the 86 targets they saw last year. In comes rookie Antonio Gandy-Golden, and veteran Dontrelle Inman, who was recently signed off the street. If we look at offensive coordinator Scott Turner's offense last year, you'll see it was very top-heavy when it came to the wide receivers, as D.J. Moore and Curtis Samuel both hit 106-plus targets. I can't say there's anyone else on this Washington receiver depth chart that deserves more than 75 targets. This could be very similar to A.J. Brown, where we're looking at a player who might get a 25 percent target share in his offense, even if it is a low volume one. The difference is that McLaurin's quarterback hasn't ever posted all-time great numbers, and it's unreasonable to expect that. Still, McLaurin can likely live up to low-end WR2 expectations, though getting him as your WR3 is the ideal scenario.