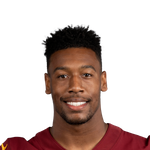 Everyone is talking about Antonio Gibson as the physical specimen on the team, but Gandy-Golden is remarkable in his own right. He doesn't run a 4.39-second 40-yard dash, but he is very agile for a player who's 6-foot-4 and 223 pounds. The biggest question mark with him is his adjustment to the stiffer competition, as he dominated at Liberty, racking up 2,433 yards and 20 touchdowns over his two years there. Once Kelvin Harmon went down with a torn ACL, it opened a door for Gandy-Golden to play opposite Terry McLaurin and make his mark. With no legitimate tight end on the roster, we could see Gandy-Golden become a favorite inside the red zone. Not that we're expecting Dwayne Haskins to throw 25-plus touchdowns, but we didn't expect anything from McLaurin last year, right? I'll be reporting on his snaps in The Primer after Week 1, so make sure you stay tuned. Given the leap in competition, he may start out behind veteran Dontrelle Inman.