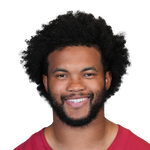 There's a realistic scenario where Murray is the QB1 at the end of the season, though I can't say we should expect it. In the first year of Kliff Kingsbury's offense, he averaged just 6.9 yards per attempt. While it was his rookie season, the Cardinals also had the element of surprise, in that no one had existing tape on the offense. Adding DeAndre Hopkins surely helps his chances, though. Did you know there were six games that Murray didn't throw a touchdown last year? Based on where his pass attempts and rushing attempts took place, Murray should've scored the third-most fantasy points among quarterbacks last year. Natural progression to his career should improve efficiency. If you're looking for upside, he's got it. He belongs in the same tier as guys like Dak Prescott, Russell Wilson, and Deshaun Watson. The difference between him and those guys? They've proved to be top-three fantasy quarterbacks already.