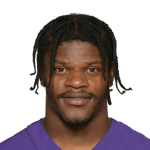 If we were replaying the 2019 season, Jackson would be the No. 2 pick in fantasy leagues, and it wouldn't be a reach. He was behind only Christian McCaffrey in value based drafting score. We talk all the time about regression when it comes to quarterbacks with a high touchdown rate, and Jackson is no different after posting a ridiculous 9.0 percent touchdown rate in 2019. That's going to come down. Lowering that mark to 5.0 percent (which is still above average), he would've thrown 20 touchdowns instead of the 36 that he did. However, something to help offset that is his rushing touchdown output. Based on where his carries took place last year, Jackson should've scored closer to 12 rushing touchdowns rather than the seven that he did. The downside to Jackson is that he's a bit thinner than you'd like as a mobile quarterback. While it's tough to get a clean hit on him, we have a history of mobile quarterbacks not withstanding a lot of hits. When you invest a second- or third-round pick on a quarterback, you need him on the field. If Jackson were a lock to play all 16 games, he'd be my QB1 and well worth a second-round pick. When you add in some of that risk, he's more of a third-round selection. There were nine separate occasions last year where he delivered 28-plus fantasy points. Those are week-winning performances.