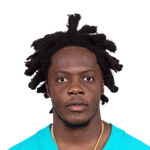 It's going to be tough for the Panthers to have much success this year, as they have a new head coach, new play-caller, new quarterback, and an offensive line that's been shifted around, all while having very little offseason practice time. The defense is in a position to allow a ton of points, which does add appeal to Bridgewater. We should see him rack up the pass attempts, and it doesn't hurt to know that his 6.2 intended air yards per target was the lowest in the league, which should mean a lot of short completions to D.J. Moore and Christian McCaffrey. The issue is that Bridgewater offers no mobility after his reconstructive knee surgery. That means he'll have to be more efficient than other pocket passers available later in the draft, guys like Kirk Cousins and Jared Goff. Again, with no offseason, that's going to be incredibly hard to do. Save Bridgewater for 2QB leagues where he's a great target as a No. 2 quarterback with no chance to lose the starting job.