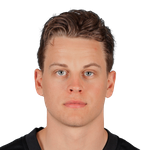 Trusting a rookie quarterback in fantasy? Nonsense. Now? After we practically had no offseason? It sounds crazy, and it probably is. However, I don't know if I've seen a quarterback with Burrow's confidence and swag come into the league in a long time. He's also walking into a situation where he has one of the best wide receiver depth charts in the league (when healthy). The offense that Zac Taylor ran last year presented plenty of opportunity, as Andy Dalton finished with the 12th most expected fantasy points despite missing three full games. He threw the ball at least 36 times in 11-of-13 games, including three games with 50-plus attempts. The offensive line is a problem, though it helps he'll get last year's first-round pick Jonah Williams back at left tackle. While the pass attempts and talent at wide receiver are great, what should attract you to Burrow is his willingness to run with the ball. Sure, he broke records as a passer at LSU, but he also rushed for nearly 800 yards and 12 touchdowns over the last two years. That adds breakout potential to a quarterback, so when you combine that with his arm talent, he makes for an ideal QB2 in fantasy. The Bengals defense is in a complete rebuild mode, and while they've added talent this offseason, it'll take time for them to come together. They allowed 26.2 points per game last year (8th most), so if they continue to struggle, Burrow could become 2020's version of Jameis Winston.