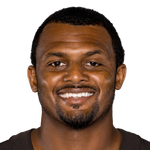 After finishing as the No. 4 quarterback in back-to-back seasons, many are starting to slide Watson down draft boards due to the loss of DeAndre Hopkins. We've never seen Watson without Hopkins, which certainly does raise some questions, but it also could provide an outlet for even more rushing yards for him. Watson maneuvers the pocket extremely well and buys himself time to find open receivers. Now without his safety blanket in Hopkins, we could see his rushing ceiling go up. Did you know he rushed for at least 32 yards in 9-of-15 games last year but never topped 47 rushing yards? That's odd, to say the least. The Texans defense will be as bad as it's ever been with Watson under center, which should mean even more dropbacks. The reason I'm still okay drafting Watson as a top-six quarterback: He's only thrown 26 touchdown passes in each of the last two years and has still been a top-12 type quarterback in 63.2 percent of his career games, which is the second-highest rate since 2000, behind only Patrick Mahomes. For context, there were just seven quarterbacks who topped 50 percent last year alone. Watson may not have the passing ceiling without Hopkins, but I'm expecting his rushing totals to make up for some of that, leaving him in the top-six quarterbacks.