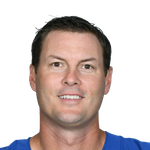 There's no masking it, Rivers was bad in 2019. He's now 38 years old (will be 39 in December), which is the age quarterbacks used to hit their decline (before Brady and Brees came along). Have we reached the end with him? He played behind a bad offensive line last year, something he's done through much of his career. In 2020, he'll play behind a top-three offensive line in football. He has already played under Frank Reich back when he threw for 4,286 yards and 31 touchdowns, then a career-high 4,792 yards and 29 touchdowns in 2015. Does that make a difference knowing it was five years ago? Well, yeah, in a way. The good news is that he at least knows the basics of the offense, which is important this year when we've had practically no offseason. The bad news is that chemistry will have to be built on the fly, and it's even harder when your top receiver (T.Y. Hilton) shows up to camp on the injured list. We did see Jacoby Brissett and Brian Hoyer combine for 22 touchdown passes last year and Andrew Luck throw for 39 touchdowns in 2018, so it's a good offense. If you want to select Rivers in a 2QB format, it could pay dividends, though his fantasy floor might be a bit lower than someone like Gardner Minshew who uses his legs. There are way too many variables to consider him anything more than a streamer in 1QB formats.