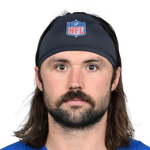 It was quite miraculous what Minshew accomplished in 2020, especially when you factor in the lack of draft capital (sixth-round pick) they used to acquire him. Don't understand just how good he was? Put his numbers up next to Kyler Murray's. Minshew averaged more yards and passing touchdowns, while having fewer interceptions per game. And keep in mind that Minshew didn't even start two of the games included in that sample. Am I going to say that he should be drafted like Murray? No. However, he is being undervalued by those in 2QB leagues. The average quarterback rushes for a touchdown every 96.2 yards rushing. Had Minshew scored three rushing touchdowns (instead of the zero that he did) on 344 rushing yards, he would've finished as the No. 14 fantasy quarterback... in his rookie season... as a sixth-round pick. The Jaguars defense is as bad as ever, so we'll see plenty of pass attempts out of him. It should also be noted that Jay Gruden (his new coordinator) has produced top-14 quarterbacks in 6-of-9 years, and the years he didn't, there were injuries and/or multiple quarterbacks playing. Minshew has zero competition and can potentially be a Jameis Winston-lite in 2020. He's the perfect target in 2QB leagues and will be streamable quite a bit in 1QB leagues.