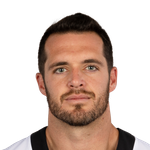 You may or not know that Mike Mayock had an affinity towards Mariota during the 2015 NFL Draft. He's the GM of the Las Vegas Raiders, so when he got the opportunity to sign Mariota, he did. This is not great news for Carr, who has been solid, but not irreplaceable over the last two seasons under the Jon Gruden/Mayock regime. But instead of replacing him, they gave him competition, even if it's one he should win fairly easily. He's going to have a much better surrounding cast in 2020, as the Raiders drafted three skill-position players in the top three rounds of the draft, including wide receiver Henry Ruggs at No. 12 overall. The issue with liking Carr, however, is that he's never going to be an every-week starting quarterback in 1QB leagues; we've learned that by now. He's also not someone you can fully trust as your QB2 in Superflex/2QB formats now that he has actual competition on the roster.