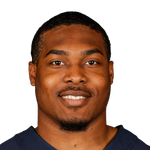 If you haven't looked at the depth chart behind Derrick Henry in Tennessee, you should know that Evans is the only one who should be considered his handcuff. The Titans worked out a long-term deal with Henry, so Evans may not even be in their long-term plans at the position even after they drafted him in the third round. But although he may not be built like a workhorse back, he has the potential to be electric in a run-heavy offense. The Titans would be wise to give him 5-10 touches even when Henry is healthy, though there's no guarantee that will be the case.