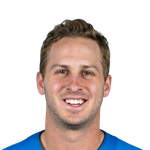 I can't explain what happened to Goff after that game in 2018 where the Rams went toe-to-toe with the Chiefs (remember that 54-51 game?) but something happened. In his first 26 games under Sean McVay, Goff threw 54 touchdowns on 858 pass attempts (6.3 percent touchdown rate). Since that Chiefs game in 2018, he's thrown just 28 touchdowns in 21 games on 806 pass attempts (3.5 percent touchdown rate). That's not great for a quarterback who offers nothing with his legs. He did throw two touchdowns in eight games last year but didn't hit three touchdowns until Week 17. Now you take away Brandin Cooks and Todd Gurley, only to replace them with Van Jefferson and Cam Akers? It's quite ridiculous, but the Rams didn't address the offensive line issues, either. Their offensive line was among the worst in football last year, which is a problem because Goff isn't good under pressure. He ranked 25th among quarterbacks with a 60.4 QB Rating under duress. The offensive line is the biggest concern for me, as that's the one thing that took a major step back last year, and it seriously impacted his numbers. The good news is that his pass attempts have been skyrocketing, which help make up for some of the decreased efficiency. Goff makes for a decent No. 2 quarterback in Superflex/2QB leagues, as he's not getting benched, and there's always the possibility he goes back to who he was, though I'm not counting on it based on the moves that were - and weren't - made this offseason.