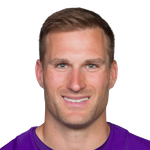 It's never easy to lose your top receiver during the offseason, which is what happened to Cousins when the Vikings traded away Stefon Diggs. They tried to replace him immediately, snagging Justin Jefferson in the first round of the NFL Draft. For a guy who threw just 444 pass attempts and offers no mobility, it's quite an accomplishment to finish as the No. 15 fantasy quarterback, as Cousins did. Now, with Kevin Stefanski out of town, you must wonder if the offense moves towards a more balanced attack under Gary Kubiak, though he may have been the genius behind the offense last year. Still, it's unrealistic to think Cousins throws the ball just 444 times again. Not only is the defense going through a rebuild process, but the Vikings just can't remain that efficient on the ground. Did you know the previous three seasons, Cousins was the (most recent first) QB12, QB6, and QB5? He's trending in the wrong direction, but he's still been a usable streamer in 1QB leagues. I'd be shocked if he's below 500 pass attempts this year, though he is going to become less efficient losing Diggs. Even if we repeated last year's numbers, Cousins ranked 20th in top-18-type performances, which make him a solid quarterback to use in 2QB/Superflex formats. He has no shot to lose the job, likely sees increased volume, and has finished as a top-five quarterback before. Just don't draft him in 1QB leagues as a starter for Week 1, because he's playing the Packers, a team he scored just 8.9 and 6.9 fantasy points against last year.