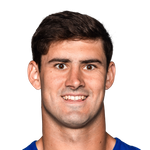 Here's a fun fact: Jones had two of the top-10 single game performances by quarterbacks in 2019. Lamar Jackson and Russell Wilson are the only two other quarterbacks who can say that. In fact, Jones had four games where he tallied 28-plus fantasy points, including three games over 30 points, something Philip Rivers has never done in his career. It wasn't all pretty, though. Outside of those four explosion games, Jones was a train wreck, finishing with 14.7 or fewer fantasy points in the eight other games he started. His matchups where he exploded were against the Washington Football team, Bucs, Jets, and Lions. That's a far cry from his start to the season in 2020 where he'll open the season against the Steelers, Bears, and 49ers. You're going to find him on waiver wires before long. In fact, he has one of the toughest schedules in the league, though the start is just brutal. What his 2019 season reminded me of was 2018 Mitch Trubisky. Don't believe me? The stats highlighted in The Primer: Draft Day Edition back that up. Now to be fair, Jones is under a new head coach, though Jason Garrett may not be a better play caller than Pat Shurmur. On top of that, Jones never got the luxury to play with Saquon Barkley, Evan Engram, Sterling Shepard, Golden Tate, and Darius Slayton on the field at the same time. The upside is certainly there for Jones to take the leap into top-12 quarterback status, but the early schedule means you shouldn't draft him in 1QB leagues, unless you plan on platooning quarterbacks. In 2QB formats, he's the ideal solution, as he has job security, rushing upside, and his defense is horrendous.