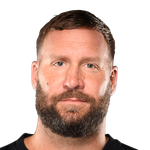 This is one of the weirdest offseasons in NFL history. It's uncharted territory with so many question marks. Then you add in Roethlisberger, who's been rehabbing from an elbow injury that had him tear three tendons in his throwing arm. Yikes. His teammates have said he looks good while throwing the ball around, and have also said he's lost weight, and looks lighter on his feet. Many are undervaluing the Steelers this year due to what happened last year, but don't forget they averaged 66.4 and 66.1 plays per game in 2017 and 2018, while averaging just 58.6 plays per game in 2019. That amounts to an extra 120-plus plays for this offense with Roethlisberger back. The pass attempts dropped from 687 to 510. While that 687 number from 2018 was sky-high, the Steelers continually have averaged 585-610 pass attempts. We can talk about Roethlisberger throwing at least 26 touchdowns in six of his last eight seasons and that he's averaged at least 7.5 yards per attempt each year from 2014-2018, but none of that matters if his elbow isn't right. It adds a level of risk to the entire roster, though he was apparently playing through some elbow pain for quite some time, and it makes sense considering how three tendons finally snapped. We'll talk about it throughout the season in The Primer, but you should also know that Roethlisberger has been horrendous on the road over the last six years, averaging just 15.22 fantasy points per game compared to the 22.19 fantasy points per game at home. He opens the season on the road against the Giants, which is a juicy matchup, but should you trust him coming off the arm injury? I'd probably play it safe and stream him throughout the year once we know he's healthy.