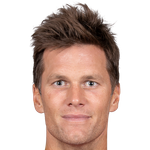 The end of an era. Crazy to write Brady's name under the Bucs, but hey, this might be the least crazy thing about 2020. He's going from Julian Edelman and Mohamed Sanu to Chris Godwin and Mike Evans. That should help his shockingly low 6.6 yards per attempt from 2019. Not only that, but 2019 was the first time in Brady's career where he didn't have a touchdown percentage of 4.0 or above. It was also the first time since 2004 where he completed less than 61 percent of his passes. Will the upgrade in receivers help him get back on track, or are we at the end for the greatest of all-time? The Patriots offensive line was not particularly good last year, so when you combined that with Brady's inability to move at all, you get bad numbers. The Bucs offensive line hasn't been good over the last few years, though they were slightly better in 2019, and they did draft tackle Tristan Wirfs in the first round, highlighting the fact that they know Brady needs protection. They don't have a James White/Julian Edelman on the roster to be his safety valve, though I suspect Godwin will become that player to him. Will the pass attempts drop off from Jameis Winston? Probably, but know that Bruce Arians has not fallen out of the top 20 in pass attempts since back in 2010. His teams have now been top-five in each of his last three years as a coach. Knowing they don't have a running back like Saquon Barkley on the roster, we should expect 580-plus pass attempts, and if you look at the receivers on the roster, and what their career averages are when it comes to yards per target, yards per reception, touchdowns, etc., it's hard to say Brady won't finish as a top-12 quarterback in 2020. There's risk that he's just flat-out done, as well as risk of chemistry with no offseason, but Brady did workout with a lot of the skill-position players even when the NFL advised against it. He's not a top-five candidate, but if you snag him as a back-end QB1, he shouldn't lose you fantasy leagues.