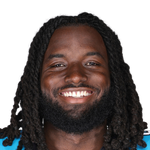 With Greg Olsen out of town, Thomas walks into the starting role. What does that mean under new offensive coordinator Joe Brady? That's tough to say, but there's suddenly a lot of mouths to feed in this offense. Christian McCaffrey is Thomas' biggest issue, as there's been just one team over the last four years who've had their top running back and top tight end combine for more than 198 targets. Keep in mind that's the max. It's rare for teams to have that duo combine for more than 180 targets. So, when you see that McCaffrey saw 141 targets last year, that's a big issue for someone like Thomas. You aren't going to take targets away from McCaffrey to feed him. During Teddy Bridgewater's stint as the starter for the Saints last year, Jared Cook finished with 7, 21, 41, and 37 yards, though he did score twice. Those yardage totals are not what we look for out of streamers, and keep in mind there's more competition for targets in Carolina than there was in New Orleans. Thomas is someone you may want to stream from time to time, but I don't see a breakout season with McCaffrey on the field.