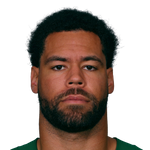 The combination of Uzomah and Tyler Eifert totaled 103 targets last year, which isn't bad on the surface, but the tight ends amounted for just a 17.4 percent target share despite A.J. Green missing the entire season. It did seem like Uzomah took over as the starter as the year went on, catching 16-of-20 targets for 125 yards and two touchdowns over the final five games of the season. It surely helped that Sample was inactive from Week 11 forward. Knowing that Sample was a second-round pick under this coaching staff, they're likely going to look for reasons to get him on the field. Sample did grade out as a better blocker than Uzomah in both run and pass blocking, too. They're both going to get playing time, but they'll cancel each other out when it comes to upside. Unless one misses time, it'll be a situation to avoid.