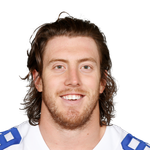 Did you know that Jarwin and Jason Witten combined for 124 targets last year? With Witten gone, a lot of targets are up for the taking in Kellen Moore's obviously tight end friendly offense. Over the last two seasons, Jarwin has seen a total of 77 targets, turning them into 58 receptions for 672 yards and six touchdowns. That's 132.2 half PPR points, which would've ranked eight among tight ends. While he may not be as efficient, it's extremely likely that he sees at least 77 targets this season. Think about it... sure, CeeDee Lamb might see more than the 83 targets than Randall Cobb did last year, but not that many more. Even if Jarwin sees just the 83 targets that Witten left behind, he'll be a top-12 tight end in 2020. With where he's going in drafts, it's a no brainer to take him as a late-round upside pick. With all the mouths they have at wide receiver, it's tough to see a top-three ceiling, but hey, we aren't looking for that.