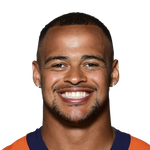 It was a successful rookie year for Fant. So many fantasy players have seemingly forgotten it typically takes a few years for tight ends to become someone you can rely on. He saw 66 targets his rookie year and ranked 15th in expected fantasy points among tight ends. The discerning part is that he didn't tally more than four targets in any game with Drew Lock. In fact, he averaged just 2.8 targets per game with him, while averaging 4.7 targets per game with the other quarterbacks. We've now watched the Broncos add three talented pass-catching options in Jerry Jeudy, KJ Hamler, and Melvin Gordon this offseason, which won't help his target share go up. On top of that, they selected Okwuegbunam in the fourth round, who happens to be Lock's old college tight end who he loved targeting in the red zone. Fant is still the top tight end on this team, but I cannot say he's a lock to see 70-plus targets in 2020. That puts him outside the starting tight end territory, and knowing his ceiling might be around 80-85 targets, I would probably look elsewhere in the TE10-15 range for someone with true breakout potential.