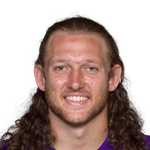 There's an article I wrote this offseason that was titled, "Which Fantasy Players Should Have Scored the Most Fantasy Points." In that article, I highlighted that every target/carry/pass attempt has an expected outcome in fantasy points. A target on your own 10-yard line isn't worth as much as a target on the opponent's 20-yard line, etc. Each of the tight ends who finished top-12 in opportunity finished top-13 at year's end, so it's clearly something to look for. Based on Hockenson's pace over 16 games, he would've been the No. 12 tight end in opportunity. Now going into his second season, we should see his role grow. Hockenson was one of the least efficient players in all of football last year, and even going over the last 10 years, his 54.2 percent catch-rate ranked 331st among 357 tight ends who've seen at least 30 targets. There's only room for improvement, so if you're looking for a potential late-round tight end, he has more opportunity than most realize.