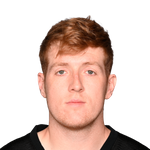 He was a popular late-round pick earlier this offseason, but after he was placed on the COVID list and forced to miss out on training camp, he's falling further down draft boards, and most of the time not being drafted at all. Packers tight ends have failed to eclipse 103 targets combined in six of the last seven years. It typically takes 80-plus targets for a tight end to finish in TE1 territory without tons of touchdowns, and though Rodgers has thrown plenty of those, his tight ends haven't combined for more than nine touchdowns in each of those seven seasons. This would be Sternberger's first trip into the starting lineup, so it's tough to expect much from a young tight end, even though I did like him as a prospect last year. He's someone that you'll be able to use as a streamer from time-to-time, but he won't be your every-week solution at tight end.