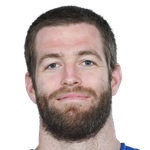 We've watched the Colts tight end duo score plenty of fantasy points over the last two years under Frank Reich, right? They've combined for 186 receptions, 2,096 yards and 25 touchdowns in that time. Now, we get Philip Rivers, the guy who's supported a top-11 tight end in all but one season in his long career, yet none of the Colts tight ends are being drafted in the top 18 at the position? The logical one is Doyle, who has now seen 105 targets in 22 games under Frank Reich. Burton is similar in the way that he's more of a move tight end while Doyle is the traditional one who'll be on the field most of the time. In a year where the Colts threw the ball just 513 times, it's good to see Doyle with at least four targets in 12-of-15 games. If you want to wait at tight end and search for a potential every-week starter, Doyle makes some sense.