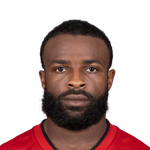 During the scouting process, I felt like Vaughn was just a guy, not a difference maker. That's not to say he wouldn't be able to produce if given the opportunity, but I don't think opportunity will simply be given to him. Don't forget that David Johnson saw just 161 touches his rookie season under Bruce Arians, and that was while he was extremely efficient. Interestingly enough, he was also a third-round pick. Then, once you hear the Bucs signed Leonard Fournette, you were able to cut bait and move on from Vaughn in redraft leagues.