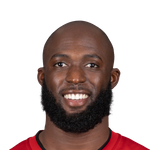 Fournette signed with the Bucs after being released by the Jaguars. His contract ($2 million base, incentives based on playing time and rushing yards) suggests that he is expecting to see significant work. Still, given that he signed with the team a little more than a week before the season begins, it's going to take him time to get acclimated to the offense. Fournette can be considered a Flex play, but don't expect him to contribute immediately and, even when he does, he won't be a workhorse back given the presence of Ronald Jones.