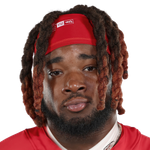 Jones' value was ascending right up until the Bucs signed Leonard Fournette, after which it dropped significantly. Fournette's contract suggests he's going to see (or at least he signed expecting to see) significant playing time, which likely moves him into a rough timeshare with Jones. Both Fournette and Jones can be drafted as Flexes, but Jones is more likely to contribute earlier in the season while Fournette gets comfortable with the offense. Draft Jones if you need someone immediately, but Fournette if you're taking a longer-term view.